This website uses cookies to improve your experience. We'll assume you are OK with this, but you can opt-out if you wish. 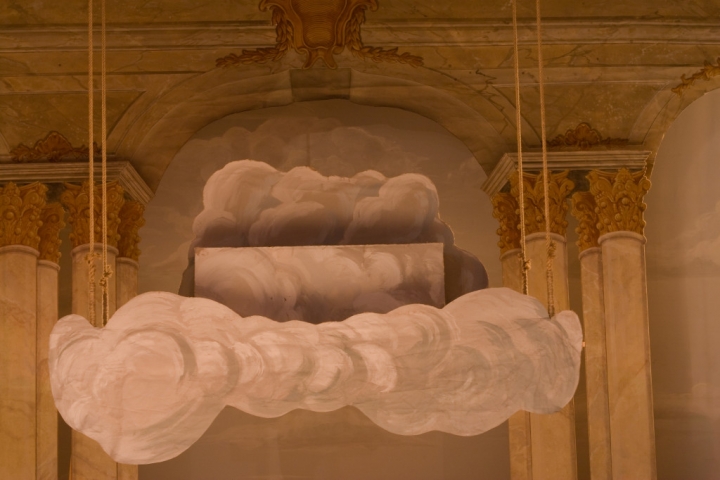 In the lush garden surrounding the Ulriksdal Palace just outside of Stockholm shines a bright yellow building, the Confidencen. Today once more hosting the Ulriksdal palace theatre, the building has a rich and varied history dating from the 17th century. Being Sweden’s oldest theatre with a season of theatre, ballet, concerts and opera, the Confidencen stands as a living monument of the origins of Swedish theatre history.

The building that later was to become the Ulriksdal Palace Theatre was originally built in the early 1670’s as an arena on the palace grounds, used by the royal family for learning the art of riding. Inside, the large building was open up to the ridge-pole and the walls were whitewashed. On the outside the walls were plastered in a light brown-reddish colour. On the front side of the building a low structure had been erected which housed an inn. The inn was popular as it was situated near the new road to Stockholm, constructed in 1670.

When Queen Lovisa Ulrika received the Ulriksdal palace as a wedding gift she commissioned the architect Carl Hårleman to turn the riding arena into a theatre of European standard. The Queen had been brought up in Germany, and was accustomed to a rich cultural life, including having a theatre at the Royal Court in Berlin. When she arrived in Sweden to marry the Crown Prince Adolf Fredrik, she was utterly displeased with the cultural life of the Swedish court. When Hårleman died, the theatre project was taken over by his disciple Carl Fredrik Adelcrantz. In 1753 the theatre was ready to be used, fully equipped and designed in the latest rococo fashion.

The inn was turned into drawing-rooms for the royalties; the middle room was made a dining room provided with a “table à confidence”, a table that was ready laid in the cellar and hoisted through the floor by means of an ingenious machinery of tackle-blocks. That way the royalties could enjoy their supper without needing to have servants around. The spectacular construction lent its name to the theatre building, the Confidencen.

In Sweden, opera and theatre flourished in the late 18th century, and singers, dancers, musicians and composers from the European continent were engaged by the Queen to perform at the Confidencen during this period. Also, the young prince Gustav (who was to become Gustav III, the “theatre king”) made his first theatrical contributions as a writer and actor on the Confidencen stage.

The Confidencen was a theatre for only almost forty years. On 16 March 1792 King Gustav III was assassinated during the Opera masquerade at the Royal Opera in Stockholm. Sweden sank into cultural obscurity and the court theatres were eventually closed.

By the mid 19th century the theatre interior and machinery had been torn down, and the King Karl XV was working on turning the auditorium into a renaissance style hunting lodge complete with wooden beams in the ceiling and a large fake fire-place. The hunting lodge plans were abandoned after the death of Karl XV, and thenceforth the building was used for various purposes, serving as telegraph station, storage room, offices, classrooms and military barracks to name a few.

In the 1920’s and 30’s, by the time the theatre historian Agne Beijer rediscovered the Drottningholm palace theatre, an interest in reviving the Confidencen was also growing, but the theatre was in too bad a condition for re-opening without spending significant money on restoring it, money that couldn’t be raised from government funding. It wasn’t until the autumn of 1976, when opera singer Kjerstin Dellert was shown the by then ruined theatre and made it her life mission to restore it, that serious plans were drawn up to restore and revive the Confidencen.

In 1981 the Confidencen Association of Friends was formed to support the restoration and activity of the theatre. Mainly with the aid of sponsors, private donors and volunteering, a theatre organisation and a growing performance activity has been able to develop since the 1980’s along with the restoration of the building and the theatre interior. The royal drawing-rooms and the table à confidence were restored in the years 1994-1997. The stage with its elaborate theatre machinery was re-built in 2003-04, with the help of drawings and comparisons with the machineries at the Gripsholm and Drottningholm palace theatres.

Today, the Confidencen is almost fully restored to its original splendour. Being Sweden’s oldest rococo theatre, it attracts scholars and theatre enthusiasts from all over the world.

Every summer the Confidencen hosts an extensive season of concerts, theatre, ballet and opera. The season starts in the spring with several productions of children’s opera and theatre, aimed at schools and families. For the last four years, Confidencen has been the venue of the international O/Modernt festival in June, a series of concerts linking baroque- and classical composers with today’s music, art and literature. The season continues with a broad spectrum of concerts, ranging from the classical to the musical theatre of today. The highlight of each summer is the full-scale opera production in July, where the rococo theatre machinery comes to life in the magical glow of candle-light.

The Confidencen – a tale of a hidden treasure

It was on a dark and snowy Sunday afternoon, the 17th of November 1976, that my husband and I were walking our dogs in the Ulriksdal Palace park and happened to meet the princess Christina and her husband Tord Magnuson. They asked us in for tea in their nearby home, and it was then that Christina asked if we wanted to see the old theatre inside the grand yellow building just next door. It was a building that I had passed many times on my walks in the park without knowing that inside it were the remnants of Sweden’s first rococo theatre, deep in an almost 200 years sleep.

We armed ourselves with flashlights and walked through the snow to the Confidencen. The princess opened the door with a large key. Well inside we were met with a stench of mold and garbage. We continued inside through the wooden doors that led to what had once been the auditorium. On the floor were wooden beams that had fallen down, taking parts of the ceiling with them, alongside old furniture, covered paintings, dead mice and dirt. The window sills were lined with snow. We found a ladder and raised it on the wall that covered what had once been the proscenium opening. I peeked through a hole in the wall and looked down the dark void where the stage had been.

I was filled with a sudden rage. Both as a human being and as an actress I felt deeply hurt that this theatre had been allowed to decay for almost two centuries. When I asked Christina why nobody had cared for the theatre in so long, she told me that people had asked the same question before and that for the past twenty years there had been plans to restore the theatre. A foundation had even been formed, but no money had been received to fund the restoration.

The Princess helped me get in touch with the Ulriksdal Palace Theatre Foundation that had been formed in the mid 1960’s. The chairman Sixten Wohlfarth gave me a key  and free access to the theatre. I found two allies in Margareta Strandberg, cultural secretary of the Solna city and Kurt Nilsson, head of culture of the Stockholm county council. Together we started to clean up the theatre in our spare time in the spring of 1977. We filled container after container with waste, borrowed an industrial vacuum-cleaner and got rid of tons of old dust and plaster. We removed the shutters from the windows and let the sunlight in.

That same spring we opened the theatre to people who were walking in the park. I stood at the entrance calling people in. A few months later we gave our first concert together with the Royal Dramatic Theatre and the Royal Swedish opera. A small step was taken towards the goal of once again filling the old theatre with artists and audience.

In the summer of 1980 I read for the first time in an article in an American magazine about sponsoring and learnt what it was and how to do it. I visited companies in Solna, the municipality where the Confidencen is situated. We started giving purchased performances where the surplus would go to the theatre. The Confidencen Association of Friends was formed in 1981. More and more people and companies gave generous support and soon we could plan for a whole season of performances and start working on plans for the restoration of the theatre.

Today, after two centuries of decay, the Confidencen is once more a living, functioning theatre. The once ruined auditorium is now filled every summer with audience. And on that spot where I peeked through a whole in the walled-up proscenium, the curtain now rises every summer to reveal a new season of opera, ballet and concerts.